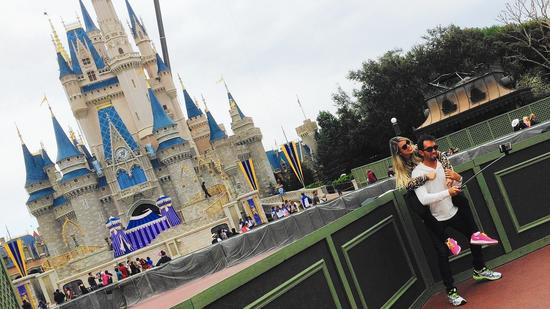 Disney will no longer allow the use of selfie-sticks in its parks.

Under a new policy, which takes effect Tuesday, the poles won’t make it past the bag check at any Disney World theme park. The sticks also won’t be allowed in Disney World water parks or DisneyQuest, a gaming attraction at Downtown Disney.
“We strive to provide a great experience for the entire family, and unfortunately selfie-sticks have become a growing safety concern for both our guests and cast,” Disney World spokeswoman Kim Prunty said.

Selfie-sticks will also become forbidden at Disneyland Resort in California on June 30. The prohibition kicks in at Disney’s parks in Paris and Hong Kong on July 1.

Guests will be checked for the equipment during the routine bag check that happens near the parks’ entrances. They will have an option of turning in their selfie-sticks for pick-up later or to go back to their cars or hotel rooms to stow them.

Visitors will be told of the policy in locations such as the parking lots and at the resort’s hotels. The prohibition will be added to the park rules post on Disney World’s website.

The issue has been building at Disney. Previously, the sticks were prohibited from its rides, and “no selfie-sticks” signs were at select rides, such as Big Thunder Mountain Railroad at Magic Kingdom. Cast members have given verbal warnings to rule breakers.

Several incidents preceded the change, but officials have been discussing the rules for some time, Disney said. This week at Disney California Adventure park, a roller coaster was halted after a passenger pulled out a selfie-stick. The ride was closed for an hour.

Selfie-stick users put smartphones and cameras on the ends of poles to extend their reach, frequently capturing theme-park moments through self-portraits. The tools have been banned in public places – including some museums and stadiums – worldwide for obstructing views or causing safety issues.

Disney World already prohibits items such as skateboards, inline skates, wagon, folding chairs and glass containers, according to its official website, which also lists “other items that we determine may be harmful or disruptive.”

Universal Orlando has prohibited banned selfie-sticks and other loose items from certain thrill rides at Universal Studios and Islands of Adventure theme parks, but it has not instituted parkwide bans. SeaWorld Orlando also does not keep the sticks from entering the parks.

Want to join the discussion?
Feel free to contribute!